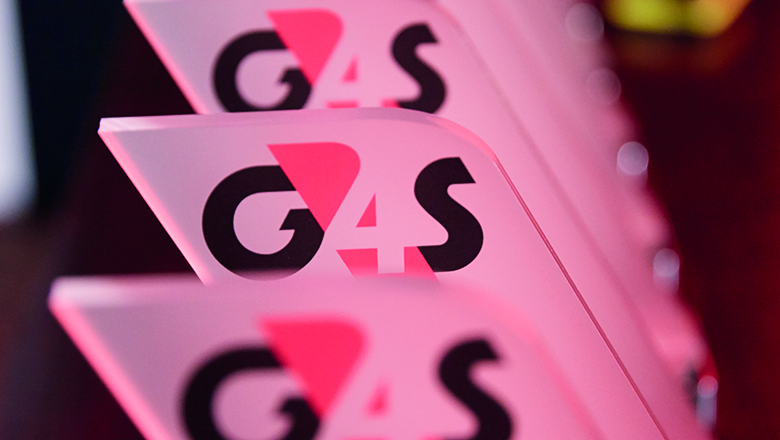 G4S Canada hosted its annual Summit Awards Thursday, February 23th, 2017 in Niagara-on- the-Lake Ontario. The company recognizes employees from across the country who demonstrate excellence in service and dedication to our customers, the company and the Canadian public.
Among the winners were Troy Phillips, General Manager Northern Alberta, The Yukon and the NorthwestTerritories. Troy received an award for his hard work and dedication to the company, to our customers, and to the people of Fort McMurray Alberta in the wake of horrific wildfires that struck that city one year ago. In one of the largest natural disasters in Canadian history, the wildfires began south-west of Fort McMurray, Alberta, on May 1, forcing the evacuation of around 90,000 residents. Two days later, the fires swept through the community, destroying 2,400 homes and severely damaging key infrastructure.
G4S Canada provides security at two of the largest oil sands locations in the area and quickly became heavily involved in the evacuation process. And as the fires began to subside in Fort McMurray towards the end of May, G4S was tasked with re-entering the city to assist the clean-up operation and ready the way for evacuees to return to their homes. At peak times, hundreds of G4S employees and many G4S vehicles were deployed around the city, helping to secure abandoned homes, businesses and other critical infrastructure.
Others recognized at this year’s Summit Awards include three employees who came to the aid of a hospital patient in an emergency medical situation. They called a code blue and performed chest compressions on that patient. In another situation a G4S employee noticed a patient standing on the edge of a hospital roof threatening to commit suicide. This guard directed a passer-by to call 911 while he called for assistance from the security team and talked to the patient until the police arrived. In yet another situation two security guards performed CPR on an individual suffering from a severe head injury. The patient had gone unconscious. EMS arrived and the patient was transported to hospital where he made a full recovery.
Nominated by their peers, the awards this year included: Health and Safety Award of the Year, Security Guard of the Year, Supervisor of the Year, Screener of the Year, Service Delivery Manager of the Year, Outstanding Operations Award of the Year, Outstanding Customer Service of the Year Award, Administrator of the Year, Employee Relations Award of the Year, Extra Mile Award and finally, the President Awards.
Often stationed in hostile environments, whether it frigid arctic conditions or in an emotionally sensitive and busy hospital, G4S heroes are sometimes depended on to perform in life and death situations. Overcoming these conditions and remaining committed to preserving the safety and wellbeing of others is what separates these individuals and epitomizes G4S as the world’s leading security solutions provider.