G4S Deployed to Fort McMurray One Year Ago 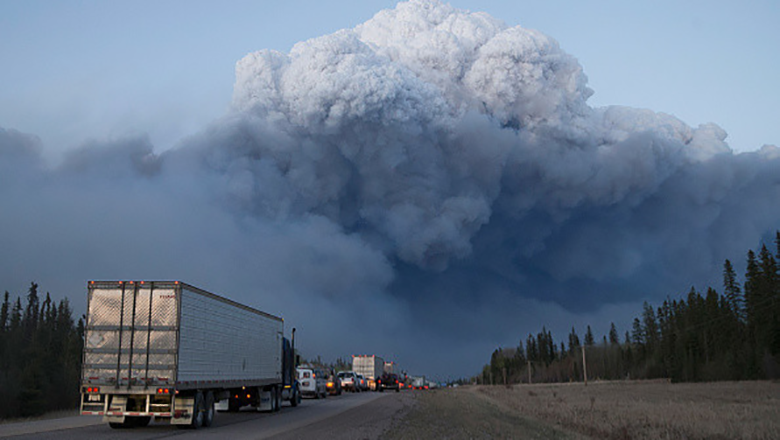 One year ago today the first wave of G4S security professionals descended on Fort McMurray Alberta in the wake of the massive wildfires that destroyed the city and forced the evacuation of 90,000 people. Within 10 days G4S deployed 170 security professionals and 70 vehicles to the city and to the work camps north of the city where G4S provides security services at two of the largest oil sands operations in the area.
The Fort McMurray wildfires are now known as one of the largest natural disasters in Canadian history. The fires destroyed 2,400 homes and burned over 1.5 million acres of land, severely damaging key infrastructure. Despite the personal tragedy they faced in the wake of the fires, including the local G4S office employees who lost homes, the G4S team put aside their own personal hardships to help with the evacuation, its aftermath, and the eventual return to the city months later. Like any military operation, the crews worked on a rotation schedule, sometimes sleeping in ice rinks, soccer fields and trailer cities.
G4S is tremendously proud of all employees who helped with these efforts during this difficult time
At the northern oil sands camp sites, G4S team members worked closely with security management, monitoring the health & safety of thousands of evacuees who fled to the camps during the mandatory evacuation.  They were charged with crowd and traffic management.  The team assisted in the eventual evacuation of Fort McMurray residents from the northern camps on flights to Edmonton, Calgary and other locations around the province.
As the fires began to subside, G4S was asked to re-enter the city and assist in the clean-up operation and ready the way for evacuees to return to their homes.  They helped secure abandoned homes, businesses and other critical infrastructure.  Their tasks included bear watch duties when the deserted city became a favourite spot for wildlife desperately looking for food.
In the immediate aftermath of the fires, the city and its residents struggled to return to “normal”.  G4S remained engaged, helping city officials with setting security plans that facilitated safe access and egress for residents.  Oil sands operations resumed.  G4S received gratitude from its customers in the area for the hard work and dedication.
G4S is tremendously proud of all employees who helped with these efforts during this difficult time.