Recognizing employees across Canada for their service and dedication to serving and protecting the Canadian public and G4S customers. 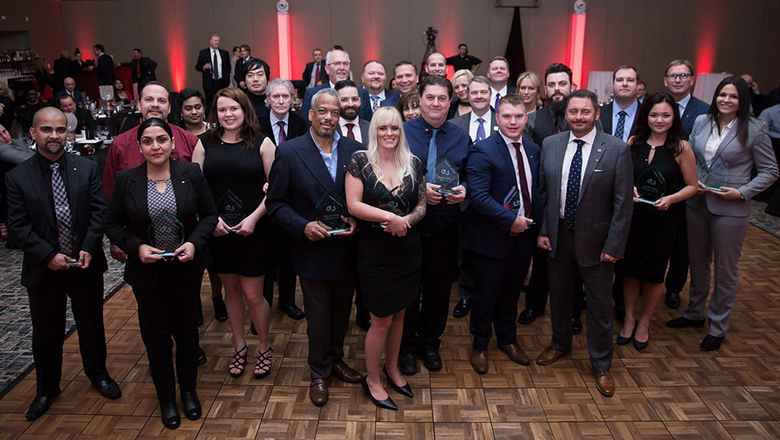 The Canadian division of G4S, the world’s largest security company, hosted its annual Summit Awards Thursday January 26th in Ottawa. The G4S Summit Awards recognizes employees across Canada for their service and dedication to serving and protecting the Canadian public and G4S customers.

Craig Blais was awarded for his courage and composure. Craig intervened in a stabbing. While on duty at night in downtown Sudbury, Craig observed a woman acting aggressively and carrying a knife. He notified police and followed her. Craig repeatedly tried to get her attention and de-escalate what he knew was a dangerous situation. She ignored him. The woman indiscriminately stabbed someone in the crowd. Craig tackled her and took her knife. He called paramedics. Thanks to Craig’s proactive approach the victim sustained non-life threatening injuries and was detained.

Jodi Cutway, a Screening Officer at Williams Lake Regional Airport in British Columbia, demonstrated her commitment to the security and the safety of others during the devastating BC wildfires this past summer. Residents of Williams Lake, a community located between Prince George and Kamloops, were asked to evacuate due to the approaching fires. While the town was being evacuated to safety, Jodi stayed behind to assist firefighters. Flames came within a few hundred feet of the airport. Jodi set up her own tent trailer to assist with security checks of the fire crew’s base camp.

As Canada’s leading provider of security solutions, we offer an integrated security solutions approach. We will assess, equip, deliver and optimize your security environment. G4S employs thousands of Canadians and operates in offices across the country. For more information on G4S Canada, visit www.g4s.ca.
^