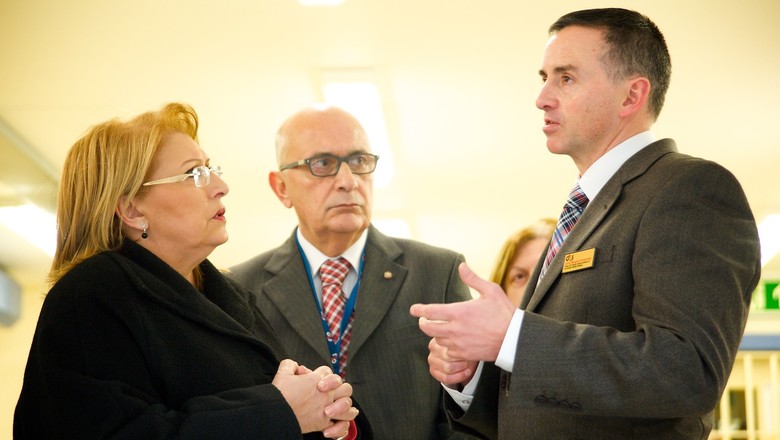 A prison wing in South Wales welcomed a President earlier this week as Her Excellency Marie-Louise Coleiro Preca of Malta visited HMP Parc near Bridgend to see pioneering work to rehabilitate prisoners and prevent their children falling into crime.

On the third day of her UK tour, the President met prisoners and staff on the family interventions unit of the 1,705 capacity prison near Bridgend.

It comes after the head of family interventions at Parc, Corin Morgan-Armstrong, addressed a conference hosted in Malta last month on ways to strengthen prisoners’ links with their families while inside, which has been shown to reduce re-offending and help prevent their children following their parents into crime.

The family interventions unit at HMP Parc focuses on prisoners’ families as a means for motivation with early indications showing that less than a third of men who have graduated through the wing have been re-convicted. On the outside, the school attendance of children from supported families has increased and not one child is assessed on leaving the project as “isolated” from their peers at school or in the community.

There are thought to be around 120 children in Malta with a parent in prison and the President has called for a family interventions unit modelled on the approach in south Wales to be set up at the Carradino prison on the island.

Her Excellency Marie-Louise Coleiro Preca, said:
“The programme conducted by HMP Parc Prison in Wales, is carried out in such a way that it takes into consideration the prisoner in the context of his family and his children, rather than taking into consideration the prisoner in isolation terms. My orientation visit to the prison is aimed at encouraging such a programme to be implemented in Malta. Meanwhile I urge NGOs working with prisoners in Malta to continue to strive in their mission to empower families and children of offenders to reach beyond their current situation and look to the future with hope and determination for a better life.”

Head of Family Interventions at G4S-managed HMP Parc in Bridgend, Corin Morgan-Armstrong, said:
“I was humbled to be able to show her excellency Marie Louise Coleiro Preca, our family interventions unit at Parc and share with her our experiences to date.

“Our programme requires prisoners to ask some very profound questions of themselves to understand what they have done both in terms of their offending and the consequences on their families. For too long, family interventions work in prison has been seen as a soft option, lacking credibility or relevance.  What we have shown is that on the contrary, it is a central causal factor in reducing reoffending and preventing children of prisoners following in their parents’ footsteps.

“I look forward to continuing to work with the Maltese government and other agencies around the world who are interested in our work and what has been achieved.”

The prison hosted royalty last year as HRH the Prince of Wales came to see the partnership between the Prince’s Trust and the prison to support young offenders turn away from crime and HRH The Princess Royal saw award-winning work with older prisoners.

Notes to editors
-          HMP Parc is a category B, 1,705-capacity adult male prison near Bridgend in South Wales managed by G4S
-          There are more than 200,000 children in England and Wales with a parent in prison which is two and half times the number of those in care and over six times the number on the Child Protection Register.  Of these, six out of ten boys with a convicted   parent are likely to end up in custody themselves
-          For more information, please contact Michael Baker on 020 7963 3171 or michael.baker@g4s.com