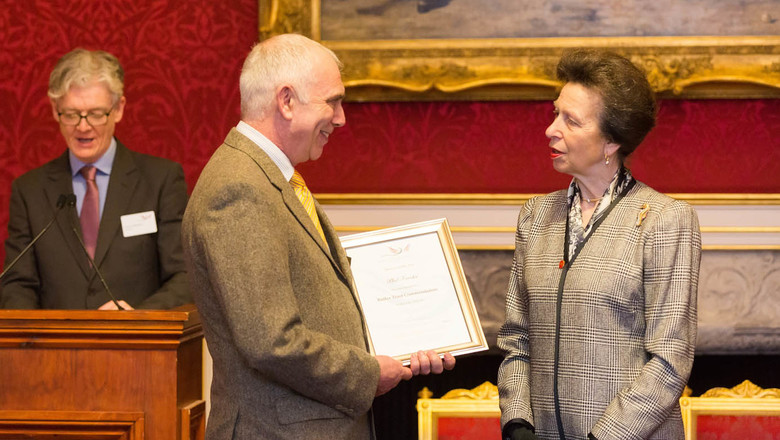 Prison officers from HMP Parc in South Wales have received two prestigious awards at a ceremony in London to recognise outstanding dedication, skill and creativity by people working in prisons.

The Butler Trust awards are named after former Home Secretary Rab Butler and the Parc winners received their awards at the official residence of the Trust’s Royal Patron, HRH The Princess Anne, the Princess Royal, St James’s Palace.

The gym team - Chris Bowditch, David Hayes, Chris Jones and Matthew Williams - were commended for their contribution both to the health and wellbeing of prisoners and to the wider prison regime.  The men were nominated for their work to integrate the sports department into the fabric of the prison using its popularity to promote equality and diversity.

The gym team has established what is believed to be the world’s first gay prisoner football team, work to promote healthy drug-free lifestyles, and offer opportunities for reparation to society through charity events.

Parc’s Community Inclusion Manager and Arts and Community lead, Phil Forder, also received a commendation for his work in promoting a more inclusive environment for lesbian, gay, bisexual and transgender (LGBT) prisoners at Parc and across the sector.

Phil is credited in his nomination with making Parc one of the safest prisons in the country for LGBT prisoners and recently published a book of LGBT writing from prisoners and staff.  In his foreword, equal rights campaigner Peter Tatchell commended the pioneering initiative and said that “where Parc goes may others follow”.

“Most people’s perception of a prison gym is probably full of macho prisoners pumping iron for the wrong reasons. Nothing could be further from the truth in HMP Parc where we have used the gym to promote inclusion for some of the most vulnerable groups in society. This award encourages us to further develop the gym as a powerful intervention as an important part of prisoners’ attempts to reform.”

“Lasting change in prisoners is as much about tackling behaviour as it is about providing work and education and that means we have to actively oppose negative attitudes in the prison community.  Although prisons are difficult places to confront prejudice, it was a tremendous honour to be recognised like this by the Butler Trust and royalty at the Palace.

“The award gives access to mentoring and training, which will help me to develop work to support underrepresented groups – such as trans prisoners – to ensure we have the environment which supports every single prisoner in their rehabilitation.”

“The Butler Trust awards are the highest accolade for anyone working in this sector and I am delighted that the fantastic initiatives pioneered by Chris, David, Chris, Matthew and Phil were recognised in this way.

“Parc has a rich history of success at the Butler Trust awards for some of the most creative and innovative thinking anywhere in the prison estate.  These awards show that despite some tough operational challenges in the past year, including the expansion to becoming Britain’s largest prison and the process currently underway to become a smoke-free establishment, the imagination and resourcefulness of the team is undiminished.

“These awards are richly deserved and I congratulate and thank the team for their work.”