In recognition of their incredible courage in the face of two separate serious incidents, Daniel Hennell and Paul Cockerham (pictured below) were presented this week with Special Awards for Outstanding Service by the British Security Industry Association (BSIA).

The first incident saw Daniel Hennell, based in the security company’s Llandudno cash branch assaulted by an attacker wielding a revolver-style gun – who struck him with such force it threw up the visor of his helmet.

Despite the fierce attack, Daniel activated his personal attack alarm. After a struggle, the gunman pointed his weapon point-blank at Daniel’s chest – but remaining calm he decided it was a fake.

After Daniel retreated into the premises with the cash box, the attacker fled the scene empty-handed.

He said: “I’m pleasantly surprised to have won this award. I wasn’t even aware I had been nominated as I feel I was just doing my job. I’m proud to have been recognised by the BSIA.”

The second incident saw Bradford Branch-based Paul Cockerham run down by a car as he walked back to his vehicle with a cash box containing £20,000.

Daniel Hennell and Paul Cockerham showed remarkable courage in the face of substantial danger and they richly deserve these special awards for outstanding service.  We are lucky to have them in our team and they are an inspiration to their colleagues, our company and the wider industry. 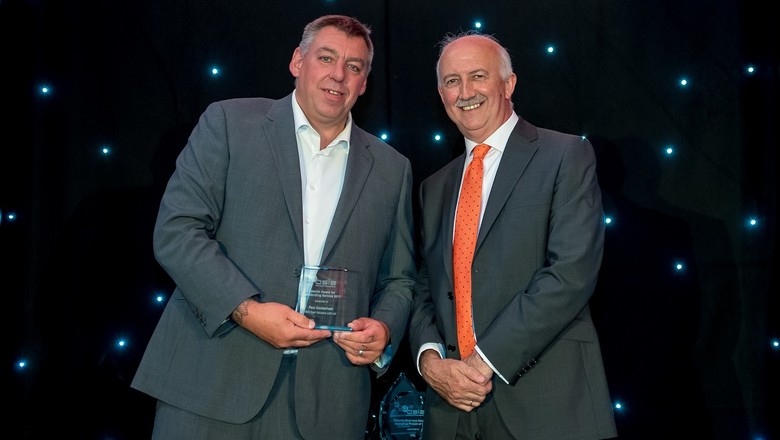 Despite the force of the impact, Paul was able to get to his feet and open the rear door of his van to place the cash box inside the secure airlock.

But before he could climb inside himself, the two attackers pulled him to the ground. Amazingly, Paul was able to close the van’s door as they did so, securing the box and its contents.

Following a struggle, the two attackers ran away also empty-handed.

When asked how he felt about his award, Paul said: “I feel ecstatic. I didn’t expect it! After all I was just doing my job.”

“Daneil Hennell and Paul Cockerham showed remarkable courage in the face of substantial danger and they richly deserve these special awards for outstanding service.  We are lucky to have them in our team and they are an inspiration to their colleagues, our company and the wider industry.

“While technology has helped us to reduce the risks that cash crews face, these attacks are a reminder of the bravery of people across the industry who face down threats in order to keep cash circulating and the pound in the public’s pockets.  They help to safeguard the prosperity of communities and our economy and they have the right to come home safely at the end of their shift.  We are resolutely committed to continuing to invest in technology, help the police to secure prosecutions against the gangs behind this kind of criminality and ultimately improve safety for everyone working in the sector.”

Chief Executive of the BSIA, James Kelly, said: “This year’s award winners were both confronted by extraordinary, dangerous situations, yet remained calm and composed in the face of adversity.

“They are a testament to the hard work, bravery and dedication that cash-in-transit couriers exhibit in their roles every day.”