Adam Rawcliffe, Director of External Affairs at the Institute of Ideas, explains why the Debating Matters Beyond Bars programme is making a real difference to prisoners’ lives at HM Prison Birmingham 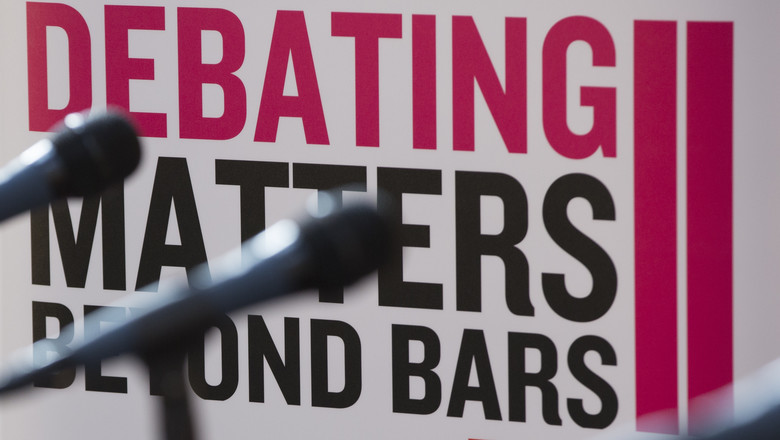 What are the benefits of the programme?
Aside from developing skills, oracy and confidence, our main aim is really about the ideas that we put at the heart of every debate. If everyone engages with big, real-world issues, it not only improves individual knowledge, but it results in a more productive society. Our motto is ‘debating matters because ideas matter’.

How did Debating Matters Beyond Bars begin?
When Michael Gove was Secretary of State for Justice he was interested in trying out some debating projects as part of the prison rehabilitation programme. One of the officials at the Ministry of Justice put us in touch with G4S, who selected HM Prison Birmingham for its well-established prison council who would really help drive the programme.

How does the programme help the prisoners with rehabilitation?
Debating teaches you to express yourself, structure arguments and make a convincing case. Skills like these are invaluable in an interview setting, and employers are invited to attend the debates so they can see them in action. Debating also helps develop writing skills. So that’s really useful for cover letters, CVs, or even letters to a parole board. But it also gets the prisoners to think about the world they’re part of outside of the prison, one that they will become a part of again. It shows them that they’re not isolated.

How does the training programme work?
We begin with two training sessions ahead of the competition. The first session is introductory, but this year we got through more than expected as the prisoners were so engaged. There’s been a residual impact from last year’s competition, as so many of them have been talking about how great the experience was. We’ve got two prisoners that took part last year returning as mentors, and I’ve been blown away by how helpful they’ve been.

We also pick the teams during the first session through an FA Cup style draw. We have capacity for six teams of six, but we also involve those who are unsure about taking part, whether it’s assisting at the training sessions or helping prisoners with their reading. The second session focuses more on developing the prisoners’ ideas and testing them. We’ve added another training session this year for the night before the round robin, as many of the teams last year were asking for last-minute help.

And the competition?
The teams are assigned into two groups for the round robin debates, with three debates in each group. If a team wins two they automatically go through to the final, but if a team wins one we get all of the judges together to decide who delivered the best argument.

We also do a special BBC Question Time-style panel just before the final debate, where a group of key opinion formers – for example, the Guardian’s Giles Fraser, the Financial Times’ Miranda Green and former Conservative candidate Ali Miraj – answer prisoners’ questions on wider issues such as Brexit or social policy, but also on issues within the prison. They really get engaged with this, and the resulting debates are fascinating.

The winners of the final debate are presented with a trophy. Last year we also gave them some books. Everyone at the Institute picked their favourite book, or a book we thought the prisoners should read, and included a note to explain why.

How are the topics chosen?
For the round robin debates, we send the prison a list of ideas to choose from. To select the final debate topic, we work together with the prison to come up with something really relevant and engaging. The prisoners receive a topic guide that includes an introductory essay plus loads of extra reading from newspapers and magazines – some of this is quite challenging, but we want to give them the chance to excel. The prisoners are given a pre-existing position, so even if they don’t believe in what they’re arguing, they have to look at the ideas and make a sound and logical case.

How are the judges selected?
We’ve been doing the competition for 15 years now, so many people we’ve worked with previously are keen to return. We try to pick one judge who has done Debating Matters before to sit on every panel, and then we go after some big, relevant names; for example, people who are associated in prison reform, or journalists. G4S and the prison also have the chance to put suggestions forward. Our judges are told to focus on content rather than style, there’s no score sheet. It’s all about the most convincing argument.

How did the Debating Matters team find the experience?
When my boss first told me we were doing the Beyond Bars programme I was extremely reluctant. But it’s one of the best things we’ve ever done. It was so rewarding, the prisoners were absolutely brilliant, and the debates were some of the best I’ve ever heard. We were all beaming, and afterwards there were a few tears shed. This year we were confident and excited to go back because we know the benefits and the impact that this kind of challenging and engaging work can have on the men inside.

Adam Rawcliffe is the Director of External Affairs at the Institute of Ideas.