In a report out today by Her Majesty's Inspectorate of Prisons, G4S-managed HM Prison Oakwood is called an "impressive establishment"

HM Prison Oakwood in Wolverhampton is one of the largest prisons in England, holding just over 2000 prisoners with over 60% of those serving sentences of four years or more. The category C prison opened in 2012, and shortly afterwards a 2013 HMIP inspection concluded that there was “a lot to do before Oakwood is operating anywhere near effectively”.
This report exemplifies the tireless work of our dedicated team over the last five years to turn Oakwood around and create a culture of respect, growth and responsibility amongst the population here.”

John McLaughlin, Director at HM Prison Oakwood
In today’s report - five years later - Peter Clarke, HM Chief Inspector of Prisons, describes Oakwood as an “impressive institution” which is consistent with “a story of steady and sustained improvement after what was a testing start six years ago”. Clarke credits the “empowerment of prisoners” through peer support as “contributing greatly to a culture of decency and respect” and praises the director of HM Prison Oakwood John McLaughlin for his “consistent, capable and courageous leadership” of Oakwood, which Clarke describes as “not an easy prison to run”.

McLaughlin took charge of Oakwood shortly after the 2013 HMIP inspection and welcomed the contrast and progress between that report and the positive findings by HMIP today: “This report exemplifies the tireless work of our dedicated team over the last five years to turn Oakwood around and create a culture of respect, growth and responsibility amongst the population here.”

“Most of the men at Oakwood are here for a long time, and we’ve worked to foster an enabling environment which empowers prisoners to contribute to the good running of the prison, learn useful skills and lead positive initiatives with their peers. The majority have grasped those opportunities and dedicate their time to purposeful activities that benefit themselves and other prisoners, preparing them for a more constructive life on the outside and discouraging a cycle of reoffending.”

“At Oakwood we face the same challenges with violence and drugs as many other prisons. We have more work to do to tackle these issues and I’m encouraged by the inspector’s findings that the measures we have taken so far are making a difference.” 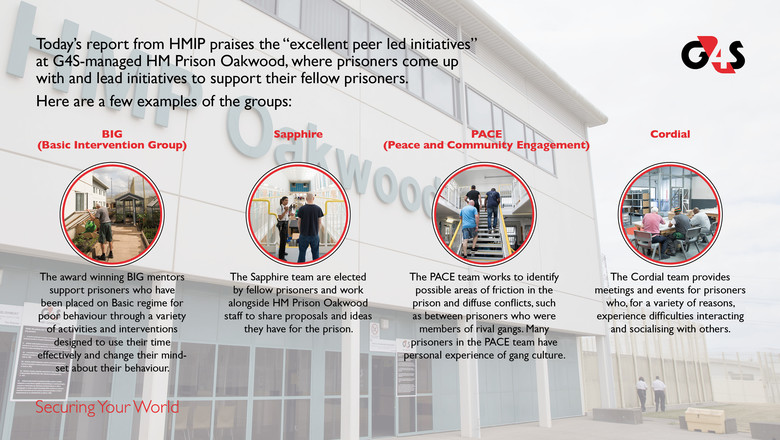 McLaughlin is a strong advocate of the “excellent peer-led initiatives” identified in today’s report, with prisoners at Oakwood taking a direct role in mediation to resolve conflicts, supporting other prisoners to stop using drugs and measures to help prisoners who have been involved in gangs. Many prisoners at Oakwood have obtained mentoring and coaching qualifications whilst at the prison, and they lead the Basic Intervention Group (BIG) which has supported over 2500 other prisoners through a range of activities and interventions designed to change their mind-set about their behaviour. Other peer led initiatives at Oakwood include prisoners who have obtained law qualifications providing advice to other prisoners, and groups that work on prison maintenance such as landscaping, painting and repairs.

Today’s HMIP report also praises the “impressive range of services” provided in Oakwood’s designated drug-recovery unit, which can accommodate up to 80 prisoners at a time and delivers a structured three-month recovery programme. HMIP states that “a strong sense of community had been created to support prisoners to remain drug free.”