Testing sites have been set up all over the UK to manage and combat coronavirus. How has G4S been involved on the frontline of a global pandemic?

On a Tuesday in early April, Jo Pipes got a call asking her to oversee the rollout of a COVID-19 testing site at Haydock Park, between Manchester and Liverpool. At that stage, the site was a vacant car park at a racecourse. It was April 7, and testing had to begin on Thursday - in three days - with key NHS workers and their families at the top of the list. Jo, an experienced G4S account manager, knew there was a lot of work to do.
“My feet haven’t touched the ground since I had the first call,” she said. “The past few weeks have felt like a lifetime. It’s not something I ever thought I would do, it’s been such a unique challenge - and one I am very proud to be part of.”
G4S has been an integral part of the UK’s response to COVID-19. At 15 of the testing sites across the UK, G4S provides overall site management. That means G4S’s facilities management team has been responsible for setting up the sites from scratch, organising the supply chain, as well as cleaning, waste management and traffic flow. Most of these sites are secured by G4S security officers. Four NHS Nightingale temporary hospitals, another important part of the UK government’s response to the crisis, are also kept secure by G4S security staff.
“We’ve got setting up testing sites down to a fine art,” Alex Lever, G4S Facilities Management’s project leader for COVID-19 testing centres, said. “We got to this point very quickly using our expertise in this area. Our employees from all over the UK have been ready to step up and redeploy to these sites. It’s understandably fast paced - having 24 to 48 hours notice is standard. Anything more than that is a bonus.” 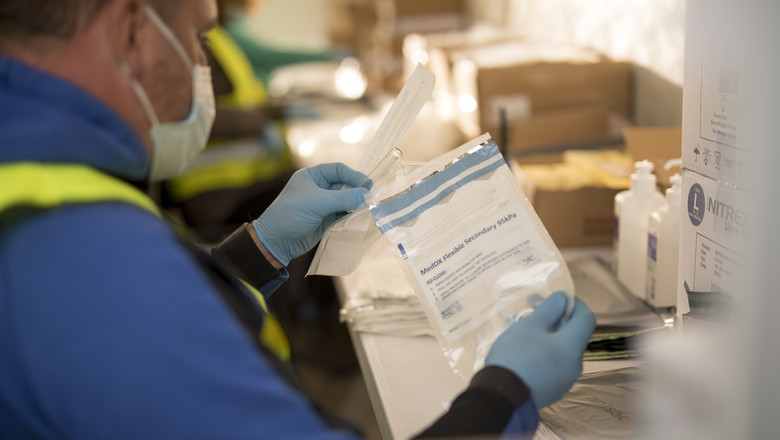 On site, G4S does everything except administer the tests, which is done by pharmacy chain Boots. Sites are divided into three zones: green, amber and red, depending on the level of personal protective equipment (PPE) required. No-one works without the correct PPE, and everyone must practice social distancing. “We’re responsible for anybody on site. Their safety and wellbeing is the priority,” Alex said.
“We order all the testing kits. We manage delivery and the logistics of the kits being taken for testing, alongside the necessary documentation. We build the kits and hand them to Boots. We book people in, we process their tests, and we make sure that kit follows them from beginning to end.”
When Jo began setting up the Haydock site, she had to draw from her years of experience managing complex contracts.
“That Tuesday, I went to the site to see it, came home, and ordered everything we could possibly need,” she said. 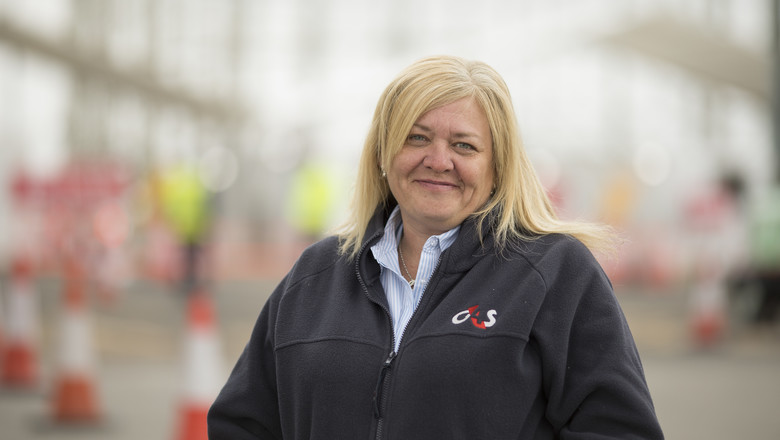 Jo Pipes, G4S Facilities Management Account Manager
“We have a standard list of what we’d need from Deloitte, the consultancy firm, who’ve overseen the whole testing site rollout. But we had to think about everything, even the small stuff. What bucket and mop do we need? You need more than one. The next day, Wednesday, I watched the site being built. All the staff came the day after - Thursday - and the deliveries arrived. I was unpacking boxes, setting up the offices, and training cleaners to clean test cabins while Deloitte were helping train staff.” The centre opened Thursday afternoon and now tests more than 800 people every day.
“We are out there on the ground, helping do our bit,” Dave Bellas, G4S Secure Solutions Area Manager for North England, said. He oversaw the site’s risk assessment. “It’s been our job to ensure those who need to get tested can get tested. It’s an emotional time. Deloitte has been exceptional, really. We’ve all had a very ‘can-do’ attitude. If there’s a problem, just fix it. It’s a very proactive and positive environment considering the tough circumstances.” 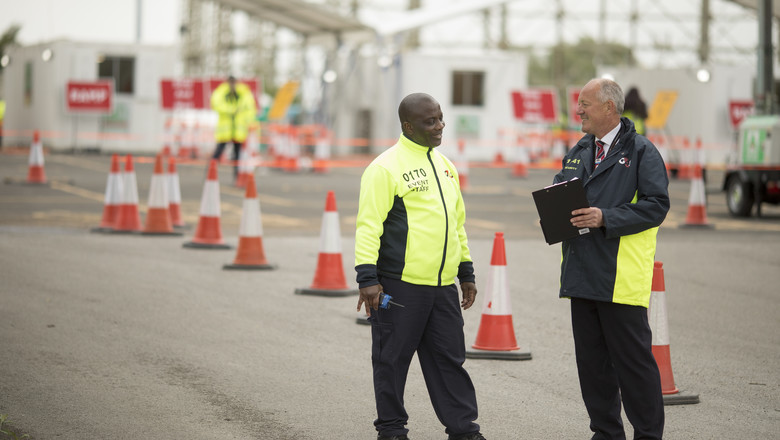 Since Haydock, Jo has helped set up four more: one in Preston, one in Bradford, one in Hull, and one at the Etihad Stadium in Manchester. The site in Manchester is the UK’s biggest: 12 lanes of drive-through self-testing designed to cater to thousands of the nation’s crucial workers. There are 20 lanes in total. G4S has set up sites in Leicester, Bristol, Ipswich, Greenwich, Worcester, Bradford, Ebbsfleet, and more.
“No-one has done this before,” Jo said. “It has all come together so quickly - traffic, logistics, testing. There are also mobile transport units being set up to run out of the testing centres.”
Alex said it’s been a great example of G4S’s ability to roll out quickly, efficiently and effectively. “It’s a case of we’ve listened to what the customer requirements are and responded quickly,” he  said.
“We’ve adapted to continually changing requirements. The speed of response has been a credit to the whole team. It’s also created a great sense of camaraderie. From a standing start a few weeks ago, we’ve now got 1350 people working.

“There’s real authenticity in this success. We’ve got the best people and we’ve made the whole process as simple, efficient and effective as it can be for the government and for the people coming to the site.”

On Thursday nights at 8pm, when the whole of the UK stops and claps for vital healthcare workers, Jo feels a surge of pride.

“I get really emotional when people clap on a Thursday night,” she said.

“They’re clapping for our COVID-19 teams, too. Everyone of them is a hero in my eyes.”
Jo pipes, g4s facilities management account manager