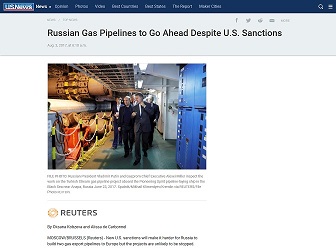 Gas Pipelines to Go Ahead Despite U.S. Sanctions - Germany, Turkey, and Russia

New U.S. sanctions will make it harder for Russia to build two gas export pipelines to Europe but the projects are unlikely to be stopped. U.S. President Donald Trump has reluctantly signed into law further sanctions on Russia but some of the measures are discretionary and most White House watchers believe he will not take action against Russia's energy infrastructure. This would allow Gazprom's two big pipeline projects to go ahead, although at a higher price and with some delays. The Kremlin, dependent on oil and gas revenues, sees the pipelines to Germany and Turkey - Nord Stream 2 and TurkStream - as crucial to increasing its market share in Europe. It also fears that Western partners - needed to develop the deep-water, shale and Arctic gas deposits that will fill the pipelines - will be scared off by sanctions. Gazprom warned investors last month that the sanctions "may result in delays, or otherwise impair or prevent the completion of the projects by the group." With all that in mind, the Russian gas giant is taking steps to reduce the impact of sanctions. It has accelerated pipe-laying by Swiss contractor Allseas Group under the Black Sea for TurkStream - even though there is no final agreement on where the pipeline will make landfall in Turkey. It is also hurriedly building a second TurkStream line to export gas to Europe. 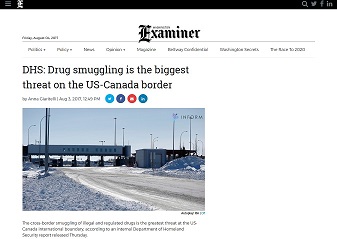 The cross-border smuggling of illegal and regulated drugs is the greatest threat at the US-Canada international boundary, according to an internal Department of Homeland Security report released Thursday. The "most common threat to U.S. public safety along the northern border continues to be the bidirectional flow of illicit drugs," the Northern Border Threat Analysis Report stated. Cocaine and methamphetamine are smuggled from Mexico through the U.S. and into Canada, while smaller quantities of fentanyl, marijuana, and ecstasy are the most popular drugs flowing south from Canada into the U.S. "To avoid detection by U.S. and Canadian law enforcement, transnational criminal organizations (TCOs) continually adapt their drug production, smuggling methods, and routes. The topography along mountainous parts of the northern border is occasionally exploited by smugglers flying private aircraft at low altitude to evade radar detection, but there are no reports to suggest that the tactic is employed on a large scale," the report stated. 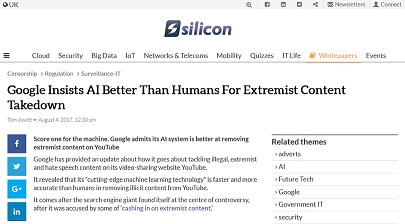 Google has provided an update about how it goes about tackling illegal, extremist and hate speech content on its video-sharing website YouTube. It revealed that its “cutting-edge machine learning technology” is faster and more accurate than humans in removing illicit content from YouTube. These AI systems have also been proven to be more accurate than humans at flagging videos that need to be removed. And these AI systems has helped Google cope with the sheer scale of the issue, after it said that its initial use of machine learning has more than doubled both the number of videos it has removed for violent extremism, as well as the rate at which it has taken this kind of content down. “We are encouraged by these improvements, and will continue to develop our technology in order to make even more progress,” said Google. “We are also hiring more people to help review and enforce our policies, and will continue to invest in technical resources to keep pace with these issues and address them responsibly.” Google also pledged to introduce tougher standards, and that any videos that don’t violate its policies but which still contain controversial religious or supremacist content, will be placed in a ‘limited state’, where comments are removed and money cannot be made from them.