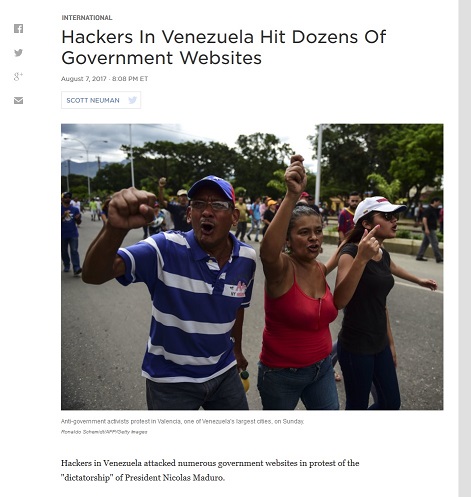 Hackers in Venezuela attacked numerous government websites in protest of the "dictatorship" of President Nicolas Maduro. A group calling itself "The Binary Guardians" said it hacked about 40 government sites, according to Reuters. "Our intention is to give hope to people that no matter how strong the enemy seems, there is strength in unity," the group wrote in an email quoted by the news agency. The hacker attack comes amid continued unrest and uncertainty in Venezuela a day after attack by armed men on an army base in Valencia. NPR's Philip Reeves, reporting from Caracas, says Maduro's ruling socialist party is portraying Sunday's attack on the base as evidence of an attempted uprising against the government that is being instigated by Washington. "His message was echoed by Venezuela's defense minister who, clad in combat clothes, made a passionate televised speech to hundreds of troops, who'd assembled for the cameras with their guns and tanks," Reeves says. 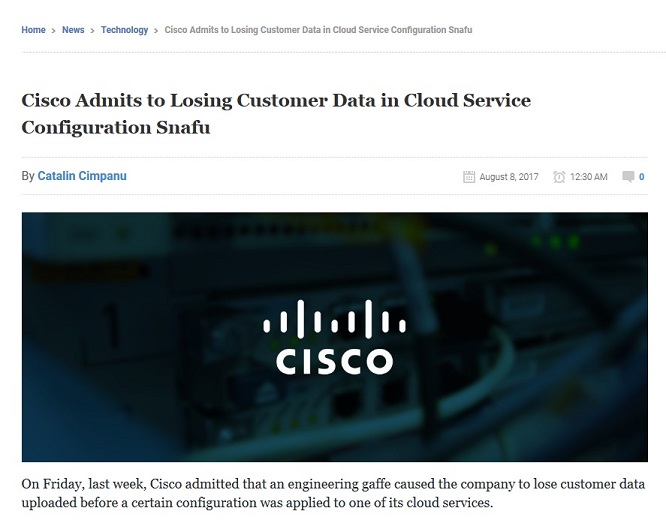 Cisco admitted that an engineering gaffe caused the company to lose customer data uploaded before a certain configuration was applied to one of its cloud services. The affected service is Cisco Meraki, a cloud-based application for centrally managing a company's Wi-Fi network settings, server routing information, CCTV systems, and other security settings, via a web-based dashboard. According to a support thread filed on August 4, Cisco engineers working on the Cisco Meraki service on August 3 uploaded a malformed configuration file that applied an erroneous policy to the Meraki North American storage system, causing some data uploaded before 11:20 AM Pacific time on August 3 to be deleted. Cisco says data such as Wi-Fi floor plans, splash themes, logos, summary reports, device placement photos, telephony server details, and general system settings were lost in the engineering snafu. This means that many companies will have to re-configure their Meraki accounts. The Meraki service is estimated to serve around 140,000 enterprise customers. It is unclear how many of these clients were affected, as Cisco declined to provide exact numbers. 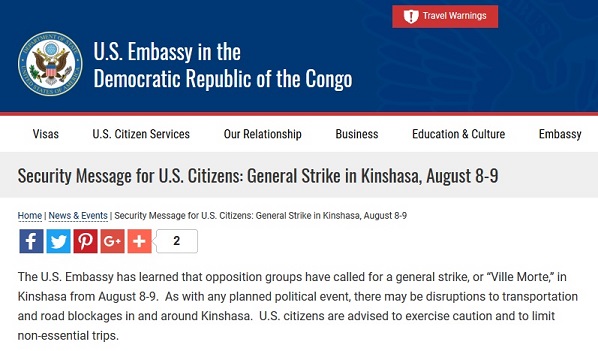 The U.S. Embassy has learned that opposition groups have called for a general strike, or “Ville Morte,” in Kinshasa from August 8-9. As with any planned political event, there may be disruptions to transportation and road blockages in and around Kinshasa. U.S. citizens are advised to exercise caution and to limit non-essential trips. Even demonstrations intended to be peaceful can turn confrontational and escalate into violence. Avoid areas where demonstrations are taking place and exercise caution when in the vicinity of any large gatherings, protests, or demonstrations.