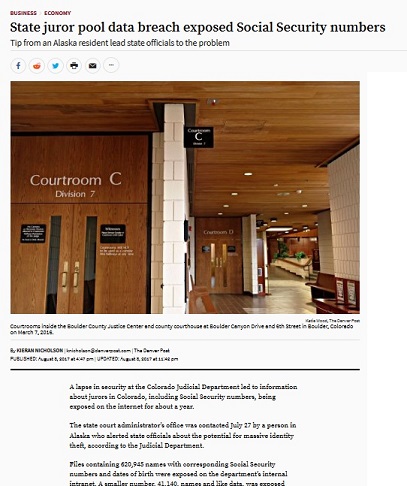 A lapse in security at the Colorado Judicial Department led to information about jurors in Colorado, including Social Security numbers, being exposed on the internet for about a year. The state court administrator’s office was contacted July 27 by a person in Alaska who alerted state officials to the potential for massive identity theft, according to the Judicial Department. Files containing 620,945 names with corresponding Social Security numbers and dates of birth were exposed on the department’s internal intranet. A smaller number, 41,140, names and like data, was exposed externally, available to anyone on the internet. The externally exposed jury files were from the following counties: Crowley (2,260), Pueblo (15,001), Rio Grande (8,878) and Weld (15,001). 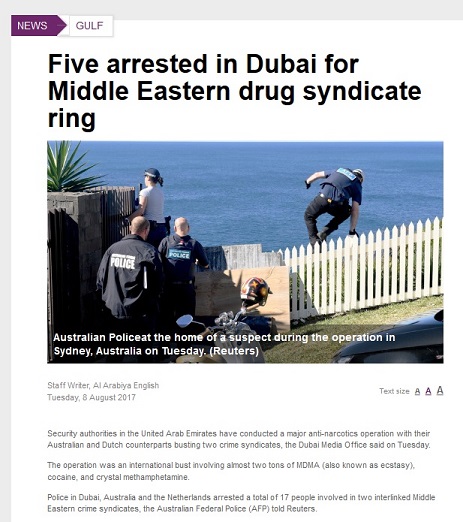 Security authorities in the United Arab Emirates have conducted a major anti-narcotics operation with their Australian and Dutch counterparts busting two crime syndicates, the Dubai Media Office said on Tuesday. The operation was an international bust involving almost two tons of MDMA (also known as ecstasy), cocaine, and crystal methamphetamine. Police in Dubai, Australia, and the Netherlands arrested a total of 17 people involved in two interlinked Middle Eastern crime syndicates, the Australian Federal Police (AFP) told Reuters. The simultaneous operations resulted in the arrest of nine men and a woman in Sydney on Tuesday while five men were detained in the UAE by Dubai police. 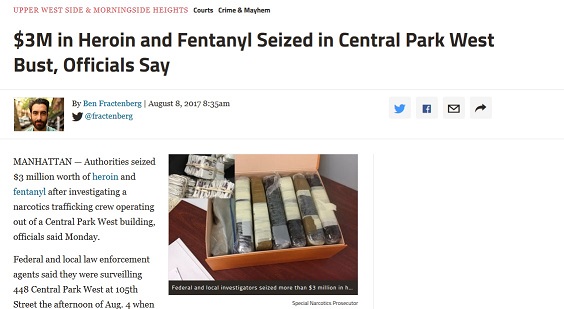 Authorities seized $3 million worth of heroin and fentanyl after investigating a narcotics trafficking crew operating out of a Central Park West building, officials said Monday. Federal and local law enforcement agents said they were surveilling 448 Central Park West at 105th Street the afternoon of Aug. 4 when they saw David Rodriguez, 32, exit the building carrying two boxes inside a white shopping bag and get into the back of a car operated by Uber driver Richard Rodriguez, 42. Agents followed the pair — who are not related, according to officials — and stopped the black Honda Accord at 121st Street and Amsterdam Avenue. The investigators saw that one of the boxes was open and a clear plastic bag containing a “tan powdery substance” was visible, officials said. They then inspected the packages and found heroin and fentanyl, officials said. Both men were placed under arrest. Investigators continued to surveil the building and a few hours later they saw Jesus Perez-Cabral, 19, and Johnny Beltrez, 32, leave the residence.