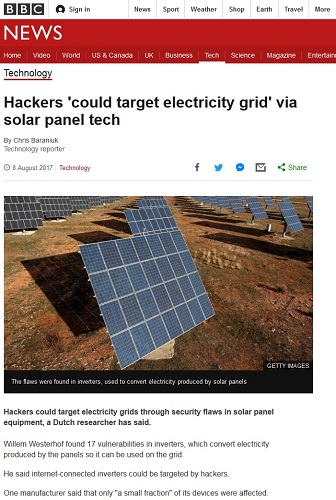 Hackers could target electricity grids through security flaws in solar panel equipment, a Dutch researcher has said. Willem Westerhof found 17 vulnerabilities in inverters, which convert electricity produced by the panels so it can be used on the grid. He said Internet-connected inverters could be targeted by hackers. One manufacturer said that only "a small fraction" of its devices were affected. After discovering vulnerabilities in devices produced by a range of manufacturers, Mr. Westerhof carried out a field test near Amsterdam on two inverters made by SMA. He told the BBC the test showed it would be possible for an attacker to remotely control the devices and alter the flow of power. Because energy equipment on the grid needs to balance supply with demand, overloading the system could result in a power cut.

The Canadian military has been deployed to build a 500-person camp at a remote location at the border as authorities grapple with a growing number of asylum seekers crossing into Canada by foot from the United States. On Wednesday, nearly 100 soldiers were sent to Saint-Bernard-de-Lacolle – just across the border from Champlain, New York – to erect heated tents to temporarily house as many as 500 people, the armed forces said in a statement. The site has become a popular crossing spot in recent months, with hundreds of people a day making the easy trip over a shallow ditch that connects both countries. Since the start of the year, the numbers of asylum seekers entering Canada from the US has risen sharply. More than 4,000 of them – many of them driven by fears of Donald Trump’s crackdown on immigrants – have entered Canada at remote, unguarded locations along the border. By doing so, they aim to skirt a 2004 agreement between Canada and the US that forces most migrants to apply for asylum in the first country in which they arrive. Recent months have seen the province of Quebec become a major entry point. As many as 250 migrants a day have arrived in Montreal in recent weeks, adding to the more than 3,300 asylum seekers who crossed into the province in the first six months of the year. 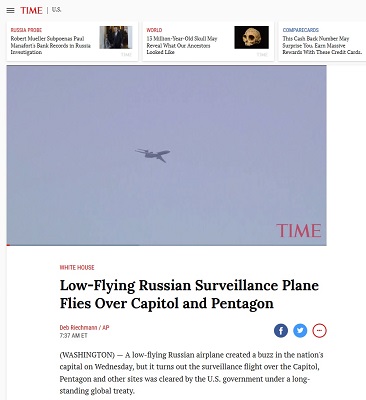 A low-flying Russian airplane created a buzz in the nation's capital on Wednesday, but it turns out the surveillance flight over the Capitol, Pentagon, and other sites was cleared by the U.S. government under a long-standing global treaty. The flight, which was filmed by The Associated Press, was permitted under the Open Skies Treaty. Russia and the United States are signatories to the treaty, which allows unarmed observation flights over the entire territory of all 34 member nations. The flights are intended to foster transparency about military activity, reduce mistrust or misunderstandings and help monitor arms control and other agreements. Dan Gaffney, a spokesman for the Pentagon, said he could not confirm the path of the plane until its mission was over. "A typical mission has several segments (flights) taking place over a few days," Gaffney said. But the U.S. Capitol Police issued a heads-up, saying an "authorized low-altitude aircraft" would enter restricted airspace over the Capitol between 11 a.m. and 3 p.m. "The aircraft will be large and may fly directly over the U.S. Capitol," the statement said. "This flight will be monitored by the U.S. Capitol Police command center and other federal government agencies."