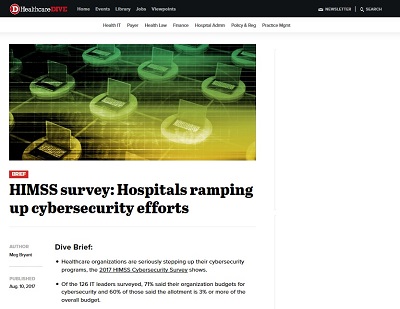 Healthcare organizations are seriously stepping up their cybersecurity programs, the 2017 HIMSS Cybersecurity Survey shows. Of the 126 IT leaders surveyed, 71% said their organization budgets for cyber security and 60% of those said the allotment is 3% or more of the overall budget. The findings released Wednesday, suggest that recent breaches and ransomware attacks — like the massive WannaCry attack that took place in May — are driving home the need for cyber security preparedness at hospitals and health systems. Eight in 10 respondents said their organization has a dedicated cyber security staff and six in 10 said their organization employs a chief information security officer or other senior-level security leader. Three-quarters of respondents also reported having some type of insider threat management program. Organizations aren't just ramping up awareness of cyber risks; they’re also checking for vulnerabilities and testing their response capabilities. More than eight in 10 IT leaders (85%) said they perform at least one risk assessment a year and 75% said they do regular penetration testing. Healthcare organizations have been a prime target for cyber criminals in recent years because of the wealth of personal data they possess in their systems. In June, an HHS task force urged the government to do more to help organizations address the problem, saying healthcare cyber security is in “critical condition.” That echoed a Tenable Network Security report from December that gave the healthcare industry a “D” for cyber security performance. 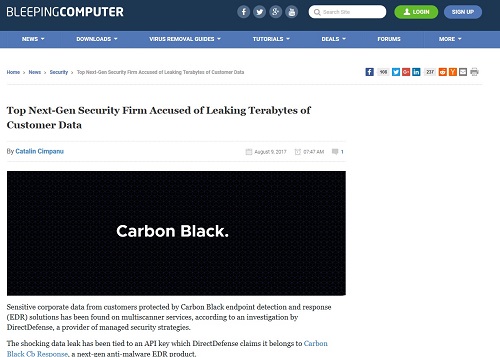 Sensitive corporate data from customers protected by Carbon Black endpoint detection and response (EDR) solutions has been found on multiscanner services, according to an investigation by DirectDefense, a provider of managed security strategies. The shocking data leak has been tied to an API key which DirectDefense claims it belongs to Carbon Black Cb Response, a next-gen anti-malware EDR product. EDR solutions work by managing lists of whitelisted files and applications. When EDR products find a new file not included in its database, they upload it to their cloud service, which it would then upload it to a multiscanner service (think VirusTotal). The EDR cloud would use the aggregated scan result from this multiscanner service to decide if to whitelist or blacklist the file. The problem is that even if the EDR and multiscanner rename the files using hashes, copies of those files are still saved on the multiscanner service. Most of these multiscanners work on a pay-for-access model, allowing anyone to access threat intelligence data on past scanned files, and even download copies for further analysis. This is exactly how DirectDefense found the Carbon Black leak. 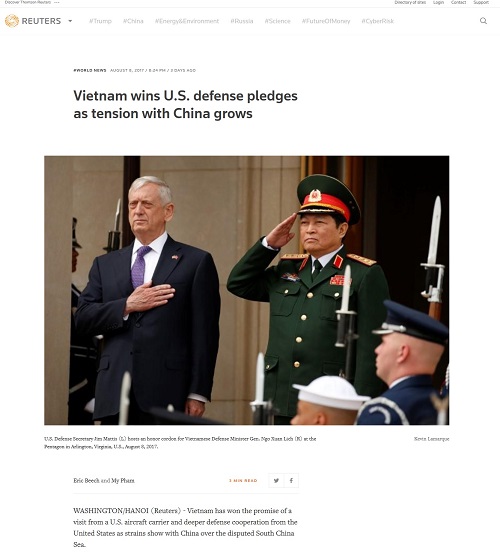 Vietnam has won the promise of a visit from a U.S. aircraft carrier and deeper defense cooperation from the United States as strains show with China over the disputed South China Sea. Within Southeast Asia, Vietnam has become an increasingly lonely voice in challenging Chinese claims to the vast majority of the waterway and was forced to suspend some offshore oil drilling last month after pressure from Beijing. U.S. Defense Secretary Jim Mattis told Vietnamese counterpart Ngo Xuan Lich in Washington on Tuesday that a strong defense relationship was based on common interests that included freedom of navigation in the South China Sea. The defense ministers agreed on a visit by a U.S. aircraft carrier to Vietnam next year - the first such visit since the Vietnam War ended in 1975. President Donald Trump discussed the possibility of a carrier visit with Vietnamese Prime Minister Nguyen Xuan Phuc when they met at the White House in May.