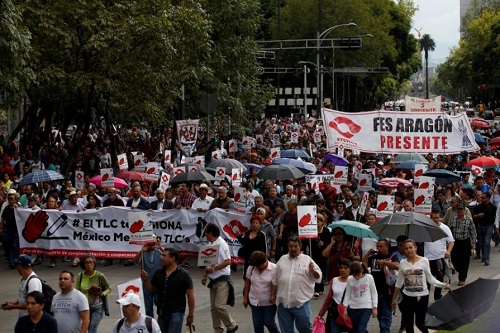 Thousands March to Scrap NAFTA, as Government Fights to Save it – Mexico

While Mexican government negotiators fought tooth and nail to save the North American Free Trade Agreement during talks in Washington, thousands of Mexican farmers and workers took to the streets on Wednesday demanding the deal be scrapped. Carrying banners that read "No to the FTA," and decorated with images of the distinctive hairstyles of U.S. President Donald Trump and Mexican counterpart Enrique Pena Nieto, the protesters said the 1994 deal had devastated Mexican farms. In a sign of that mistrust, on Jan. 1 1994 the Zapatista guerrilla army launched an armed uprising opposing free trade to mark the first day of NAFTA. The fervor has faded and most Mexicans, including leading leftist Andres Manuel Lopez Obrador who will run for president next year, now broadly support a deal which has led to job growth, especially in the auto manufacturing sector. A recent poll found most Mexicans wanted to save NAFTA.

As the Confederate statue battles continue to brew across the nation, this weekend, two protests are planned in Houston, but not on the same side. One group wants the Spirit of the Confederacy statue in Sam Houston Park removed, while the other says it should stay. Houston Black Lives Matters and other groups are planning a protest right in downtown for this Saturday afternoon. Their goal to remove that controversial statue. They're calling it “Destroy the Confederacy.” The Spirit of the Confederacy come under criticism before, and it's the target of a petition that's gotten more than 2,000 signatures asking the city to remove the statue. However, the people asking for the statue's removal won't be the only ones here on Saturday. According to the Facebook page for a group that calls itself “This is the Texas Freedom Force” is putting out a call for counter-protesters to show up and opposes that statue's removal. Now, if that second group's name sounds familiar, they're the same group that showed up for a large rally in San Antonio last weekend opposing the removal of Confederate statues there. This is also the same group that organized a rally at the Sam Houston Statue in Hermann Park earlier this year after online rumors circulated that groups wanted that statue torn down. 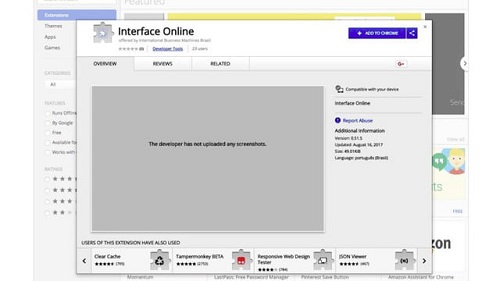 A piece of banking malware discovered hiding behind a Chrome extension on Google’s Chrome Web Store for the second time in almost as many weeks, is just the latest to slip through in recent months. A number of nefarious applications have been infecting systems all over the world using the download platform, and many have been able to evade the most commonly used anti-malware solutions. While of course, some anti-virus solutions that are better than others, sometimes a piece of malware is so sophisticated it’s able to avoid detection by them all. This latest infectious trojan was discovered on the Chrome Web Store, and it masquerades as the “Interface Online” extension. It avoided detection by the 58 most common anti-viral applications. Indeed it was so difficult to detect that even though it was removed just over two weeks ago from the Chrome Web Store, it was reuploaded and made available again very recently, prompting the need for another user-report to bring it down. Discovered twice by the chief research officer at Morphus Labs, Renato Marinho, the extension received upwards of 50 downloads during its tenure on the extension download platform.