Honor presented by Employer Support of Guard and Reserve (ESGR) 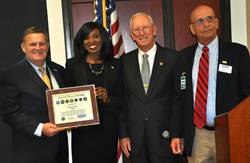 During the presentation of the award, Mr. Miller noted that “G4S does such a fantastic job of offering jobs to members of the military. They’ve hired in excess of 25,000 service members over the past several years. We’re very proud of them and for them. That’s why I’m here to be part of this celebration and to be a part of this great event.” (A video of the celebration is included below.)

G4S began actively recruiting military as part of its Custom Protection Officer program. Candidates can qualify to be a CPO with one of the following disciplines, including: military elite forces, military police or career military. Meeting these and other stringent experience and training requirements makes these security officers the best in the business.

While accepting the award, G4S’ Reynolds noted: “When the White House started the Joining Forces campaign in 2011, we were one of the first companies to participate because we know it’s a win-win proposition. Since then we’ve hired more than 24,000 veterans and we intend to continue our efforts with the military community.”

While speaking during the Veterans Day ceremony, G4S’ Levine agreed: “The experience and dedication of our service members is unparalleled. With 26% of our workforce made up of former and current military members, I feel strongly that our company’s success is tied to our relationship with service members, and I welcome this opportunity to say thank you.”

G4S Secure Solutions provides specialized offerings for companies in a variety of industries. We create significant value for our customers through our people, software and innovative programs. For more information about G4S and our veterans programs, visit our veterans careers page.