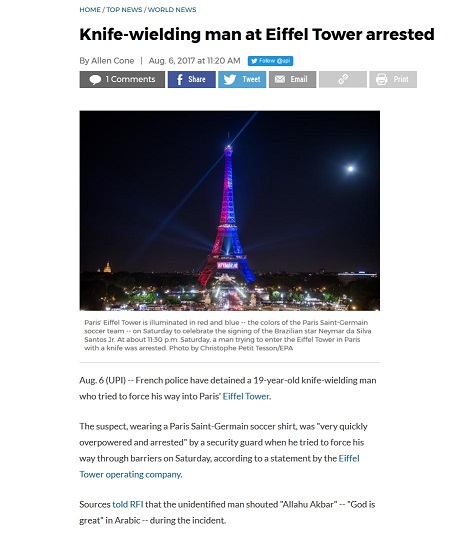 French police have detained a 19-year-old knife-wielding man who tried to force his way into Paris' Eiffel Tower. The suspect, wearing a Paris Saint-Germain soccer shirt, was "very quickly overpowered and arrested" by a security guard when he tried to force his way through barriers on Saturday, according to a statement by the Eiffel Tower operating company. Sources told RFI that the unidentified man shouted "Allahu Akbar" -- "God is great" in Arabic -- during the incident. Sources described the suspect as a French national born in Mauritania, western Africa, who left a psychiatric hospital in July. 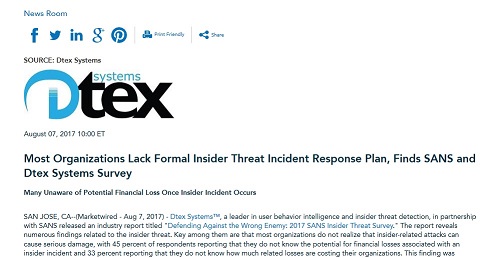 Dtex System, a leader in user behavior intelligence and insider threat detection, in partnership with SANS released an industry report titled "Defending Against the Wrong Enemy: 2017 SANS Insider Threat Survey." The report reveals numerous findings related to the insider threat. Key among them are that most organizations do not realize that insider-related attacks can cause serious damage, with 45 percent of respondents reporting that they do not know the potential for financial losses associated with an insider incident and 33 percent reporting that they do not know how much related losses are costing their organizations. This finding was especially troubling when taken into consideration with facts from a recent Ponemon report which revealed that organizations were spending upwards of $4.3 million to mitigate, address and resolve insider-related incidents. Most alarmingly, the SANS report found that only 18 percent of respondents acknowledge having a formal incident response plan with specific provisions for insider threats and 38 percent of those with response plans admit that their detection and prevention capabilities are ineffective. This indicates that when it comes to winning at cybersecurity, organizations are just starting to focus on the easiest attack vector: the insider. "It's no surprise that insiders pose the greatest threat to cybersecurity because they are often the most vulnerable. As organizations increase perimeter security and lock down their systems, their servers have become more difficult to compromise, but it leaves insiders as the easiest target," said Christy Wyatt, CEO at Dtex Systems. "The answer involves filling the gaps where some malware detection tools, endpoint based anti-virus platforms and user behavior analytics solutions fall short. The need for visibility into user behavior while keeping employee privacy intact has never been greater." 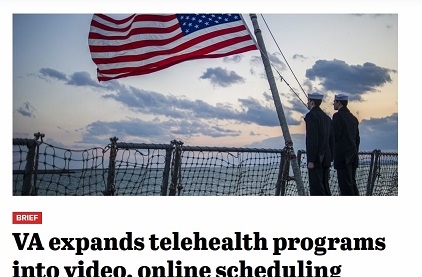 The Veterans Administration (VA) announced last week three telehealth and mobile application initiatives to expand healthcare access for veterans and allow them to get care at home. The VA will expand its telehealth program, including Anywhere to Anywhere VA Care, VA Video Connect and the Veteran Appointment Request app. In announcing the initiatives at the White House, President Donald Trump said the programs will help mental health and rural care. VA Administrator Dr. David Shulkin said the VA already had the largest telehealth program in the U.S. with 700,000 veterans receiving telehealth care through the VA in 2016. VA telehealth has more than 50 clinical specialties. In the announcement, Shulkin highlighted a new initiative and two expanded programs that will remove “geography as a barrier so that we can speed up access to veterans.” The first piece is a new regulation that authorizes VA providers to serve veterans anywhere across the country using telehealth technologies. The Anywhere to Anywhere VA Care program will allow providers in metropolitan areas to connect with rural veterans that “lack sufficient medical services,” according to the agency.