Director of HMPYOI Parc Janet Wallsgrove was awarded an OBE in the Queen’s New Year’s Honours List for her services to the Prison Service. 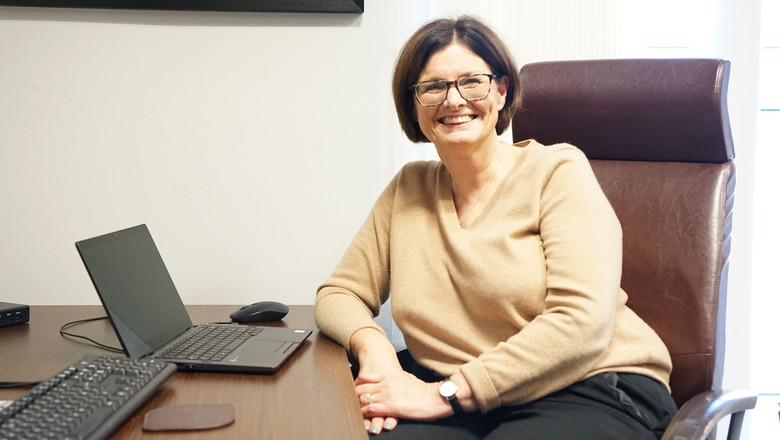 Reflecting on a career spanning almost four decades, she describes some of the incredible changes she has witnessed across the Criminal Justice System and experiences that have shaped who she is today.

“I was a naive 21-year-old without much life experience when I first began working at the women’s open prison, Drake Hall,” Wallsgrove recalls.

“I knew I wanted a job that would mean dealing with people and not be stuck behind a desk, so the graduate scheme appealed to me because you could work your way up and prove yourself as a prison officer.

“I didn’t know what to expect - I knew it would be interesting and challenging and I’d be in contact with difficult people - but I really had no idea of the breadth and depth involved.”

In 1983 the prison service provided a steep learning curve for the History degree student, but she quickly discovered the importance of teamwork.

“I was really fortunate my colleagues were ex-military and we pooled resources - they taught me to march and I helped them study for exams. We learnt very early on that a successful team pulls together people with different skills - an aspect to the job I’ve always loved,” she explains.

Wallsgrove’s experience of prisons before Parc is significant, each role helping form the basis of the progressive and unique style of governance for which she is widely recognised and respected for today.

“Prisons were tough in the 80’s. It was an extremely male-dominated environment with no computers, TVs, phones or any real sanitation - prisoners had to use the bathhouse once a week and scrub floors on their hands and knees,” she remembers.

“And my father in particular, wasn't happy about me joining up.”

Female inmates at Drake Hall and HMP Holloway taught her the importance of boundary setting and the need for good interpersonal and communication skills when dealing with the complexities of those under her care.

“I expected violence in prison but not the rest that came with it,” continues Wallsgrove. “There were some very difficult people and career criminals, but also some extremely complex mental health cases and other very damaged individuals. At the time there wasn’t much staff guidance so I also had a lot to learn in terms of people, systems and risk,” she explains.

“My governor was really a man ahead of his time in terms of innovation, change and rehabilitation and it was during his tenure the first computers were brought in and governance discussions really began,” she remembers.

“My Principal Officer (equivalent to today’s Operational Officer) was the first person to really take the time to explain what it was all about. If there was a problem he would go the extra mile to solve it, bend the rules if needed and was always prepared to speak his mind.

“He took great pride in working with any prisoner - particularly those in segregation - at a time when many others didn’t, so was respected by staff and prisoners alike.

“He taught me that you have to find your own way, your own style and the importance of finding that balance of being firm but fair,” she adds.

Successive positions followed at a busy local Victorian men’s prison in Birmingham and preparing Category A prisoners for release into the community in Kent, before returning to Wales as Deputy Governor and overseeing improvements leading to HMP Cardiff becoming the best performing prison in Wales.

Despite this experience, Wallsgrove still felt ill-equipped when promoted to positions of Deputy and then Director, at the privately-run G4S establishment.

“Suddenly I had to learn a whole different language - dealing with commercial issues, the concept of delivering a service to a customer and defining my customer engagement approach,” she explains.

“It was so different to what I had done before - until then I had only dealt with staff, prisoners and their families.”

I see this award as being for all the fantastic members of staff I have - prisons are a hard place to work and everybody should be really proud of what we have achieved here.

Janet Wallsgrove, Director at HMPYOI Parc
Despite rising levels of drugs and violence, increasing demands on outside mental health and psychiatric services and higher degrees of scrutiny and expectation impacting on the level of service Wallsgrove is ultimately responsible for, in conjunction with ‘difficult beginnings at Parc’ and dealing with threats made against her family, her commitment to the criminal justice system has never wavered.

“There’s always something to learn and that’s why it’s such a great job - every day is different and I’m still constantly learning. It’s gratifying to see how much has evolved and you’ve never really seen it all,” she continues.

Identified by HMPPS as the best-performing Young Offender’s establishment in the UK (and the only one to continue education delivery throughout the pandemic) since first opening in 1997, the site has doubled in size to include specialised Family, Veteran, Safer Custody and drug treatment unit and programmes - all assisting offenders with appropriate support and treatment through sentence and upon release.

“Innovation can be stifled if we are looking for a perfect plan and what’s important is that we never stop trying - I have been so fortunate with the exceptional people I have had working here who are full of ideas, passion and commitment and I’m very lucky being able to allow people to try new things. Yes, we’ve made mistakes,” Wallsgrove admits.

“But the important thing is we learn from them and evolve. I was shocked and surprised to be nominated for what I consider to be just doing my job, but also really proud because I wouldn’t be where I am now, without the team around me.

“I see this award as being for all the fantastic members of staff I have - prisons are a hard place to work and everybody should be really proud of what we have achieved here.” she concludes.

Allied Universal®, a leading security and facility services company, provides proactive security services and cutting-edge smart technology to deliver tailored, integrated security solutions that allow clients to focus on their core business. Our acquisition of G4S in 2021 expands our footprint and infrastructure on a global and local level. Through our vast network of more than 800,000 employees, we leverage global best practices in communities all over the world. With revenues of approximately $20 billion and a presence in 90 countries, we are supported by efficient processes and systems that can only come with scale to help deliver our promise locally: keeping people safe so our communities can thrive. We believe there is no greater purpose than serving and safeguarding customers, communities, and people in today’s world. Allied Universal is There for you™. For more information, please visit www.aus.com.
^