This major producer of renewable energy eliminated its theft issues with the help of a G4S integrated security solution.

The customer is one of the world’s largest renewable energy producers, with wind, hydroelectric, and solar power generating solutions in its extensive portfolio. In Serbia, the company maintains one of the largest wind farms in the country, and it was this location where a major security issue had developed.

The customer is highly successful, but a large-scale theft problem was damaging its profits and project timelines. Over an area of 40 square kilometres, the customer has a total of 57 unassembled wind turbines and about a dozen offices and storage containers with tools and other supplies. Temporary construction sites are also near these turbines as they are being assembled, which means even more equipment and supplies are at risk.

The previous security company was unable to get a handle on the theft problem, which was causing project delays in addition to financial loss. When the issue reached its tipping point, the customer reached out to G4S to work toward implementing a new and improved security solution.

The major issue the customer faced was the loss of equipment and supplies due to theft, so the primary goal was to eliminate theft opportunities. This would mean an all-around improvement in security and would require a unique solution due to the large area requiring security coverage.

The previous security company had used only traditional manned guarding, which had proven to be ineffective. The goal for G4S would be to devise a strategy using both manned guarding and technological security solutions to completely solidify the perimeter of the wind farm. This would be a tall task, as many turbines are in an area with no road infrastructure, which means no electricity.

The first step was to complete a security risk assessment to determine risks, threat factors, and threat impacts. Only after completing this analysis could G4S design an adequate security solution that would fortify the areas at greatest risk.

G4S would then devise a security solution that achieved cost-effectiveness by partially replacing security guard services with technology solutions. These solutions would work in unison to improve security on the campus and aim to completely eliminate theft. The elements of the solution included:

This solution was an innovative approach that was custom built for this particular customer due to its very unique set of circumstances. The stand-alone wireless sensor and video-alarm systems, in particular, were highly unique solutions that enabled technology to be used despite the lack of on-site electricity that hindered traditional security systems.

Upon the start of the contract with the customer, G4S immediately deployed its mobile patrol and response team and replaced the static security guarding force at the campus’s main security gate.
Within two weeks of the agreement, G4S had implemented the perimeter video alarm system connected to the G4S ARC. Finally, three to four months into the project, and after over 40 wind turbines had been assembled, G4S implemented its innovative wireless intrusion detection sensors around the perimeter.

With the security solution components in place, incidents of theft at the wind turbine sites had been completely eliminated. Previously, the customer had been experiencing a €50k loss per event. By eliminating theft completely, G4S was able to save the customer from massive financial losses. In addition, stopping the theft of supplies and equipment ensured the customer’s projects would not be delayed. 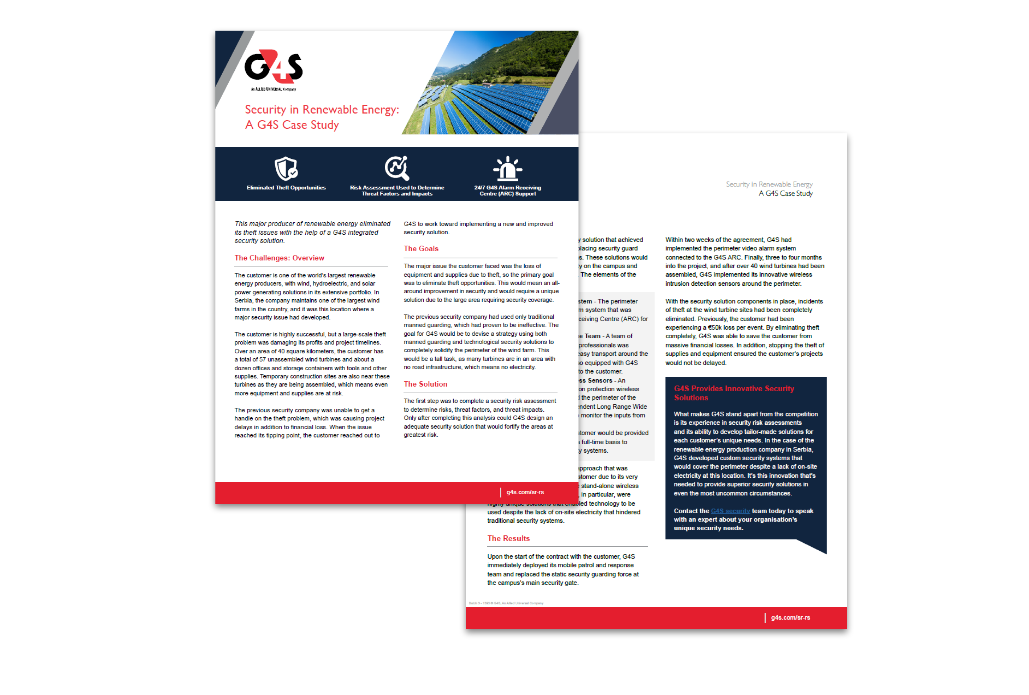