Robotics into the Future

Into the Future with G4S Technology 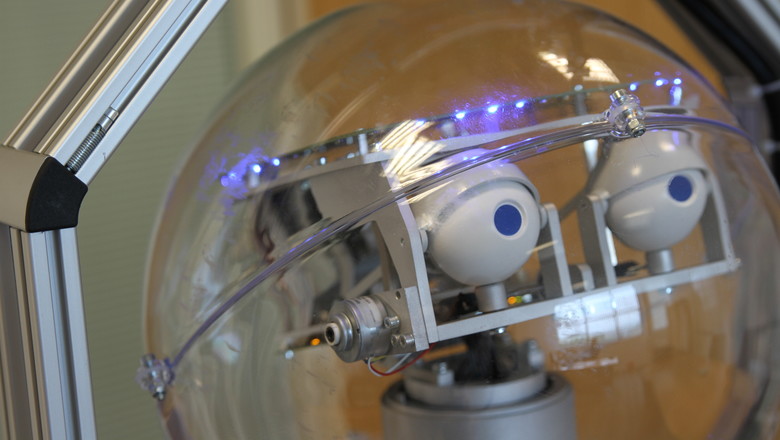 An innovative approach to security that could make robots valuable colleagues. The Strands are a truly European family consisting of three males and three females, all with university backgrounds. They work in various European countries and all are involved in a pioneering interactive scientific project.

Lucie and Linda Strands, for example, have links with the Universities of Leeds and Lincoln in the United Kingdom respectively, and their sister, Rosie, passed through the Royal Institute of Technology, Stockholm, Sweden. Karl has connections with Aachen University, Germany, his brother Werner is a product of Vienna University of Technology, Austria, and UKbased Bob has close ties with the University of Birmingham, UK.

Bob Strands made quite an impression when he spent time at G4S Technology’s Tewkesbury offices, Gloucestershire, early in 2014, where his commitment to scientific innovation required him to acquire certain basic security tasks, which he then performed impressively.

What makes all of the Strands “children” remarkable – and sets them apart from the rest of us – is that they are not human. Each is a Scitos: a versatile, mobile, five-foot tall service-robot, capable of communicating with people and performing various functions. They have been enlisted to assist the exciting European Community-funded £7.2 million project called STRANDS – an acronym for “Spatio-Temporal Representation and Activities for Cognitive Control in Long-Term Scenarios” – which runs through to 2017.

In layman’s terms this refers to the creation of a robot to achieve robust and intelligent behaviour in human environments through adaption to, and the exploitation of, long-term experience. Scientists at the six universities have been developing various work packages focused on aspects of robotics that can assist and make important contributions to the lives of humans.

One aspect, which is being researched by Birmingham University, is the development of a robot “capable of performing useful tasks from real-world care and security settings”. That is why G4S Technology has become an enthusiastic participant in the project as well as a member of the consortium led by the university’s Nick Hawes. His special interest is the application of artificial intelligence techniques to create intelligent, autonomous robots that can work with or for humans. An Austrian hospital is also a consortium member.

G4S Technology sees its involvement in the development of a robotic security officer as a natural extension of the company’s global involvement in sophisticated security solutions such as access control and CCTV systems with built-in intelligence.

“We had previously been involved in research at Bristol University in a related area – intelligent video analytics – and were ready to embark on something new when we were approached by the Birmingham team,” says Dave Ella, G4S Technology’s vice president, Product Marketing. “It’s a project that is quite relevant to G4S because technology solutions of all types will play an increasing role alongside our security officers, and robotics are one of the technologies we need to be involved in.“

“One way to look at a robot is as an intelligent mobile sensor with a camera, enabling you to extend the reach of a security system. One of the priorities for the university development teams is to integrate alerts from the robots to Symmetry, the G4S access control, alarm and video management system that is used by G4S customers around the world.

“Security solutions are all about combining people, process and technology in innovative ways, and innovation is what customers are expecting from G4S. We can see the day where security officers, Symmetry and robotic technology all come together for our customers.

“We have shown Bob the Robot to the heads of security of two major multinational corporations. Both left with some new ideas about how a robot could work alongside G4S security officers and our Symmetry access control systems for the benefit of their businesses. They also took away a positive impression of the unique forward thinking innovation which G4S is capable of bringing to the table.”

What used to be regarded as science fiction is rapidly becoming science fact as various projects around the world are developing intelligent robotic solutions that either reduce the need for humans to perform mundane tasks, or enhance the lives of individuals in care.

Bob the Robot has been used to patrol G4S Technology’s UK headquarters as the first part of his work experience, “mapping” its corridors and offices along the way and looking for anomalies or differences that may present a security risk or hazard. He can then send an alert to human colleagues who could take appropriate action.

There’s no suggestion that Bob and fellow robots will ever entirely replace humans in protecting people and assets. But STRANDS is certainly pushing back the boundaries and learning valuable lessons about the possibilities and limitations of robotics in security.

In doing so, its robots are joining an increasing number of similar devices that are showing great promise and could open up an incredible range of collaborative possibilities.

A typical example is Asimo, built by Honda Motors to help humans with mobility problems. There are reports of robots being used in restaurants to deliver food to diners. Others have been developed to provide companionship. There’s even an intelligent, mobile robot that contains a replica of the simplest form of life we know – the worm Caenorhabditis – enabling it to think for itself as it moves around, rather than being programmed.

Pros and cons
There is a downside that has to be considered, too, which is that the development of full artificial intelligence could pose a threat to the human race. The warning comes from Prof Stephen Hawking, one of Britain’s pre-eminent scientists, who uses technology based on artificial intelligence to communicate with others, having lost his speech due to motor neurone disease.

His fear, he told the BBC in an interview, is that if artificial intelligence is created that can match or surpass humans “it would take off on its own, and redesign itself at an ever-increasing rate”. Humans, who are limited by slow biological evolution, “couldn’t compete and would be superseded”, he added.

Fortunately, that day has not yet arrived, and effort is currently being focused on developing robots that are beneficial to us in a huge variety of ways and technology – like some of the robots themselves – is making great strides in that direction. What’s more, they don’t need breaks and can even recharge themselves at a docking point when their power begins to wane.

“Major roles for security officers are in interaction with employees and visitors and dealing with fast changing unusual circumstances,” Dave Ella observes. “It’s going to be a very long time before a robot can accomplish any of these tasks but what we do see in the medium term is robots having the ability to carry out some additional patrolling tasks to free up security officers to carry out the added value tasks at which they are really good.”